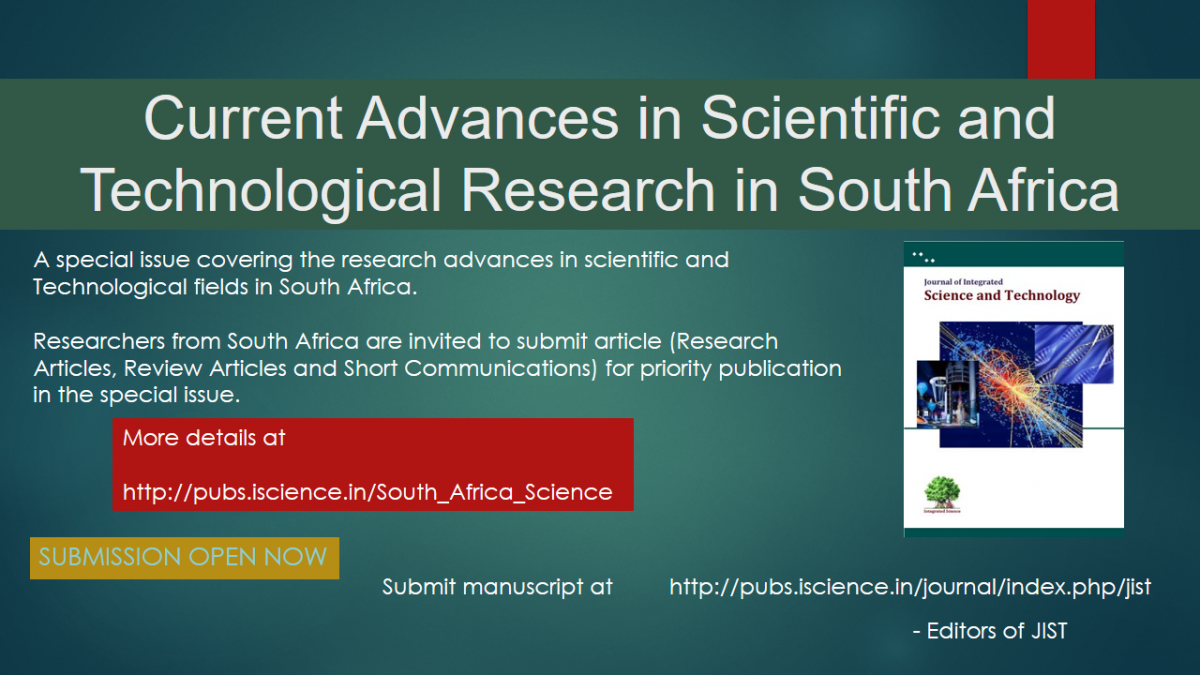 The Scientific and Technological research in South Africa is advancing at a notable pace and remarkable research contribution by researchers from South Africa are getting recognition world over. This special issue intend to cover the current research advances in South Africa for publication in JIST journal.

The Journal of Integrated Science and Technology has been publishing research from interdisciplinary fields of Science and Technology and as a integrated approach for covering the recent advances in the scientific and technological research, the editors of journal are considering articles for a special issue covering the current research advances in scientific and technological research from South Africa to extend an opportunity for the researchers towards priority publication of their research output.

The editors of the journal invite Research Articles, Review Articles, Short communication articles from researchers from (and working in) South Africa in the interdisciplinary research in following subjects

Authors need to prepare their manuscript according the author guidelines provided on the journal site and submit online on journal site. http://pubs.iscience.in/journal/index.php/jist

Articles will be published with open access. There is NO fees or APC for publishing in this issue (Platinum Open Access – Authors do not pay any kind of charges).

Submissions are ongoing (researchers can submit now), and articles will be processed and published continuously (as we go model) till the final completion of the issue.

The articles will be edited by editors of respective sections with support of all editorial board members including
Prof. S. Khasa, (Editor-in-Chief) Department of physics, DCRUST,
Prof. Hendrik C Swart, Editor (South Africa), University of Free State,
Prof. S. Padmanaban, University of Johannesburg
and other EAB members (see the member details at journal site). 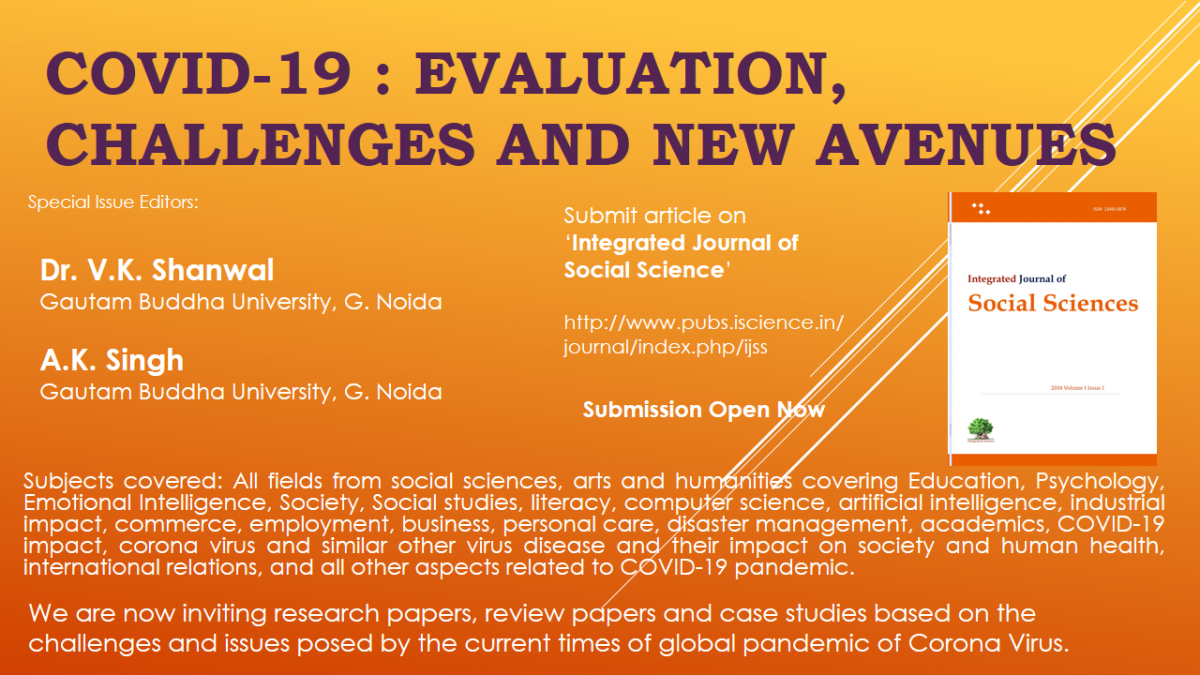 Integrated Journal of Social Sciences is a multidisciplinary peer reviewed journal. We are now inviting research papers, review papers and case studies based on the challenges and issues posed by the current times of global pandemic of Corona Virus.

Article must be prepared strictly according to author guidelines provided on the journal site http://www.pubs.iscience.in/journal/index.php/ijss/about/submissions and submit on journal site.

There is no fees for publication in this special issue.

The following video tutorial may be used for inserting the citations in manuscript using Mendeley program (a free software from Elsevier). More informative videos related to Mendeley will be made available on this page time to time. Users may join the ScienceIn group on Mendeley for importing articles of their interest and cite in their manuscript. The links are
> Materials Sciences Articles
> Medicinal Science Articles
> Social Sciences Articles

Nuclear Medicine, a medical specialty involving the application of radioactive substances and magnetic materials in the diagnosis and treatment of disease have been highly successful in diagnosis of difficult to detect diseases and therapy of various dreaded diseases. Recently, there have been a tremendous research progress in development of newer methods, conjugates and pharmaceuticals for diagnosis and therapy using nanomaterials and nanomedicine approaches in radioactive materials.

The purpose of this special issue proposal is to summarize the recent advances in the field of new NanoMedicinal and Nanobiotechnological advances in development of probes and materials for potential molecular targets and understanding of their mechanism of actions, new radioconjugates development using nanobiomaterials, clinical evaluation and application of new Nano-radiopharmaceuticals, and new techniques/therapy development using Biomaterials. Recent progress will be covered through research articles, review articles and short communications.

The subtopics to be covered in this issue are (though not limited to):

Nuclear and Nano-Medicine researchers are invited to submit their research / review article for this special issue. Manuscript should be prepared and submitted as per author guidelines provided on journal site.

Author Guidelines for preparation of manuscript:

There is no fees for publication in special issue or journal.

The present study aimed to investigated the antiproliferative potential of Mosinone-A on cell proliferation, apoptosis and cell cycle proteins during 7, 12-dimethylbenz[a]anthracene (DMBA) induced hamster buccal pouch (HBP) carcinogenesis. A total number of 40 golden Syrian hamsters were randomized into 4 groups of 10 animals in each. Group I animals were served as untreated control. Groups II and III animals were painted with 0.5% DMBA in liquid paraffin three times per week for 14 weeks on the left buccal pouches. Group III animals were orally administered with Mosinone-A (2 mg kg-1 b.wt) starting one week before the exposure to the carcinogen and continued on days alternate to DMBA painting, until the sacrification of the animals. Groups IV animals were received Mosinone-A alone throughout the experimental period. Topical application of DMBA for 14 weeks induced buccal pouch carcinomas associated with increased expression of Cox-2, P21, iNos and SIAT1 whereas decreased expression of Bax, Cleaved caspase-9, P12DOC-1, p16INK4A and p15INK4B. Oral administration of Mosinone-A significantly inhibited the development of HBP carcinomas as revealed by decreased expression of Cox-2, P21, iNos and  SIAT1 and over expression  Bax, Cleaved caspase-9, P12DOC-1, p16INK4A and  p15INK4B. The result of the present study indicates that Mosinone-A can exerts protective effects against DMBA induced buccal pouch carcinogenesis by inhibiting cell proliferation and inducing differentiation and apoptosis.

Note: this manuscript has been removed from journal due to ‘no response from authors’. It was reviewed and accepted by editor for consideration in Chemical Biology Letters, however, authors did not respond to emails and reminders for required revisions and submission of revised/updated manuscript.

Phytomedicine is plant based therapeutics development, a discipline of modern scientific analysis and application of traditional medicinal practices based on various plant materials in prevention and therapy of diseases. The special issue on phytomedicine covering recent advances on research in scientific advances on plant based medicine development span the subfields (though not limited to as phytomedicine is a very wide discipline):

Research Article, Review Articles, Short Communication and Experts View on phytomedicine should be prepared as per author guidelines and submitted on the Journal website at http://www.pubs.iscience.in/journal/index.php/jbts/

Note: there is no publication charges for publishing in the special issue or in journal.

#Citation Source: Google Scholar for IF (interim) Calculations. *Citation recorded as on 28-Dec-2018 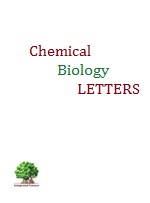 #Citation Source: Google Scholar for IF (interim) Calculations. *Citation recorded as on 21-Dec-2018

Unit 7: Human communities and the Environment